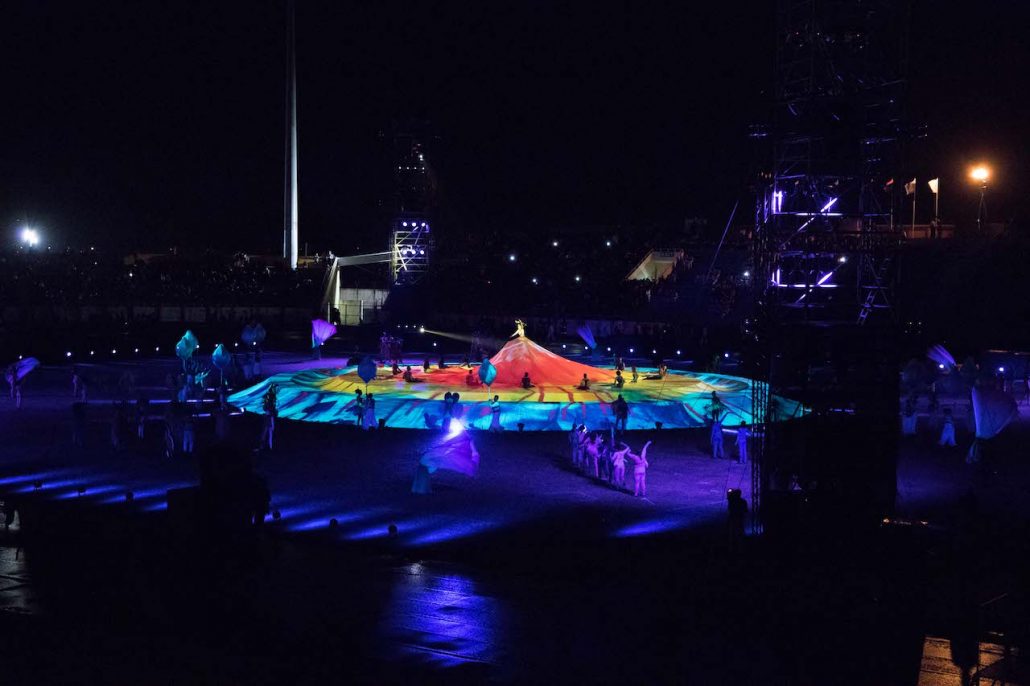 Just a year ago, on July 19, 2019, the seven islands of the Indian Ocean participated in the 10th edition of JIOI, which was launched at the Anjalay Coopen Stadium.
A moment awaited by all Mauritians and by the thousands of athletes and their supporters who had moved from the various islands of the Indian Ocean.
An emotional opening ceremony when Eric Milazar, ex-champion and Marie Lourdes Allysamba Appadoo, captain of the Mauritian selection and former Heptathlonnian, lit the magnificent fire in bowl of the JIOI in the shape of a flower specially designed for this occasion.
An Anjalay stadium adorned with the most beautiful light clothes for this extraordinary ceremony carefully prepared for months by Impact Production Group and by Emizibo.

An original 360 ° scenography allowing the public to sit all around the show and a huge circular podium over 24 meters in diameter.

After an emotional ceremony, the show started with a countdown which introduced a series of paintings narrating the nature and history of Mauritius.
A show of more than two hours using quantities of complementary technologies all developed by the teams of Impact Production Group while the image content, the management of the four hundred artists, the framework of the show and the costumes were signed by Emilien Jubeau.
Videomapping type projections, breathtaking sound, lasers, magic light complemented by special effects and a magnificent tale, of an island people from different horizons, their traditions, their cultures.
An ode to multiculturalism, progress, modernism and the preservation of the environment.
All of this magnified by flawless technology and sparkling fireworks in a stadium refurbished for the occasion allowed thousands of spectators to dream and be transported “out of time”.
Behind this immense work, Impact Production Group and Emizibo teams provided a formidable work – nothing would have been possible without the help of the Olympic Committee but also of Jean Pierre d’Argent who, from the top of these dozens of years of experience has provided invaluable assistance from day one to day one.
Thanks to all these shadow technicians without whom nothing could have been possible, to all the artists, their coaches, scenographers, choreographers, costume designers, decorators, carpenters, 3D designers and of course the Minister of Sports, Stéphane Toussaint, to Sadda Vuddamalay and all the others for their confidence and their help without forgetting the tireless and always present Jean Pierre Sauzier who raised mountains to make this event possible.
As always, such an organization is never the work of a single man, but that of a united and confident team.
Everything has still not been easy and the weather conditions have played troubles during all the rehearsals but the opening ceremony of these 10th Indian Ocean Island Games which also coincided with the 40th anniversary of the competition was an intense moment that Mauritians and all spectators will never forget.